On a glorious June day in Oxfordshire, The Gibbon and Cairns Fudge, former stalwarts of the OCA, embarked on their inaugural Cherwell Win-Lose-Draw format game at The Recreation Ground, Marsh Gibbon.

Certainly that other new confounder: Duckworth Lewis Stern would not be needed as it was, and had been, red hot Dutch all week. The pitch looked an absolute belter and there was only one thing required and that was for skipper to win the toss….. Despite all his practicing during the week, Skipper Stu’s tossing skills remained below par. The coin came down and Fudge chose to have a bat (unsurprisingly)

Marsh knew that a few key early Fudge wickets were important. Nathan ‘Crouch’ Callow and Kyle ‘County Boy’ Needham opened up and after 7 overs the run rate was being well tapered, 28-0. Fudge’s Tom Small was in terrific form coming into the game and continued striking the ball firmly. The introduction of Julian ‘Jules’ Chambers and USA international signing Pandit was required to mix up the attack to get that all important first wicket. Pandit delivered by knocking over the contained Baxter for 27 at 104-1 from 21 overs.

Joined by MacLaren, the runs continued to come from Small’s willow and he raced to his Ton in just 89 balls, including 15×4’s and 3×6’s, one of which nearly ended up in Brill…sorry Jules! Gibbon were ruing a couple of dropped chances to evict Small prior to reaching his landmark and now focussed on seeking to contain as best as possible on a deck that was exactly as it promised to be; nothing but joy for the batter and toil for the bowler.

Vice Leonard and Crabby Cross entered the attack along with Sam-Boy Richardson to try and stem the flow of runs, but it was a dam well breached. Boundaries coming aplenty and a couple more dropped chances to boot. Gibbon were in for a long afternoon in the field though with the score on 183, Crabby Cross finally got one past Small’s bat to bowl him on 119.

With such a solid footing all risk was abated for Fudge and the bat swung freely safe in the knowledge of a solid total irrespective. The travelling ball went aerial enough times for catching chances to improve Marsh’s lot, but they were being dropped, by too many to name names! In the 44th over, with the score on 236-2, MacLaren was bowled by the returning Needham for 47 and the very next ball Williams (who’d travelled from Bristol for the match) was stumped by a very sharp piece of work from Skipper Stu behind the sticks.

Yet more blunders in the field with Crouch taking a blow on the leg stopping an over throw and also Crabby Cross suffering from an incident involving him slipping and landing on the ball…in golfing terms, I think, ‘reverse-plugging’ would be an appropriate description of the event and there were no volunteers venturing forward to remove the ball from its resting place within Crossy’s anatomy! Fudge’s skipper Shaw joined Hanscombe at the crease with a licence to entertain and scored 42 from 32 balls before being caught by Webb of the bowling of Vice Joe Leonard…third time lucky! Fudge finished on 313-5 from their 53 overs, a total never reached at the Gibbon before (but the first time an inning has lasted more than 45 overs).

Tea was taken in the steamy conditions, Jules had forgotten his tea and was being eaten by Mrs Chambers…at home…. The Gibbon knew that to be in with a shot of tackling the target a flying start was required. Webbo was promoted to open with Vice Leonard under Skippers instructions to go for it and enjoy yourselves. They did just that and after 6 overs Gibbon were well up with the rate at 55-0 as Leonard and Webb punished anything loose, dealing in boundaries to conserve the legs.

Just as target computations began to be made with the score reaching 68, Webb, who was just getting into his stride, fell to Clark leg before. Vice Joe was joined by Chambers to steady the ship but he quickly fell for 10 chipping one to Small at midwicket off the bowling of Clark – you’re not yourself when you’re hangry Jules!

Vice and Skipper were at the crease together and Stu had a look for a couple of deliveries before dispatching MacLaren over his head for four to get going. Unfortunately, only two balls later an amazing  geometric feat was observed as the right handed Skipper was given LBW to aright arm around the wicket delivery – impressive!

Joe, who finally was looking like he could actually hit the ball off the square this season was 2 short of his half century before a rush of blood brought about his demise and was bowled by Robertson. Richardson replaced Joe but struggled to get his legs going and was also LBW for 5. In came Alex ‘Tatey’ Coultate with skippers first ever instruction to “shut up shop.” With the score on 100-5 from 25 overs the required rate was more than 8 and the Yorkshireman summoned metaphorical images of his boyhood idol Boycott wielding his grannies stick of rhubarb, and blocked up as per instructions.

Pandit was a little more expansive with his shot selection than the terraces would have liked, nevertheless he contributed stoically to a 50 partnership and, more importantly, ticked down the overs.

At 153 from 38 overs, Pandit succumbed to yet another LBW on 27 and with 9 over remaining and still 4 wickets in hand The Gibbon was in the hands of Tatey and Jacob ‘Cobby’ Chambers Jnr. The 9 overs flew past for the Gibbon faithful on the boundary edge and despite whatever Fudge threw at them Tatey and Cobby stood firm to ensure Gibbon remained undefeated, finishing on 179-6 from their 47 overs.

A well-deserved beer was in order for The Gibbon after a long day in the field…thanks Skipper…and fines were aplenty, mainly in dropped catches. Vice Joe finally got the delightful homemade Lemon Drizzle Cake out which he had forgotten to get out at tea much to the delight of Jules who was taking all the food that he could find. Marsh march on this weekend to another new location and opposition with a visit to Bledlow Village.

The first Drawn game at The Gibbon and the questions ruminate as to whether that was a better game than it would have been with a simple victory and defeat?  Did the Fudge players enjoy the last hour and a half bowling at batters who were clearly taking no chances?  Did the major error lie with Fudge skipper Shaw for not declaring after 48 overs with 267 on the board and no more bonus points to be earned? After all, Marsh had spent 3 hours in the baking sun and would need to score at more than 5 per over for 52 overs – which would also give Fudge 5 more overs to bowl Marsh out and win the game outright?  As Marsh had nothing to gain, Tatey and Cobby enjoyed a longer knock than they would have survived vainly chasing the huge total and does that mean more players get more of a game under this format?

These imponderables will remain unanswered but what is fact, is that after conceding the most runs in a single game, Marsh did not lose, nor win – but they moved up the league table from 4th place before the game, to 3rd place after it!   Is that progress? Who knows, but in the words of Paul Daniels “That’s Magic!” 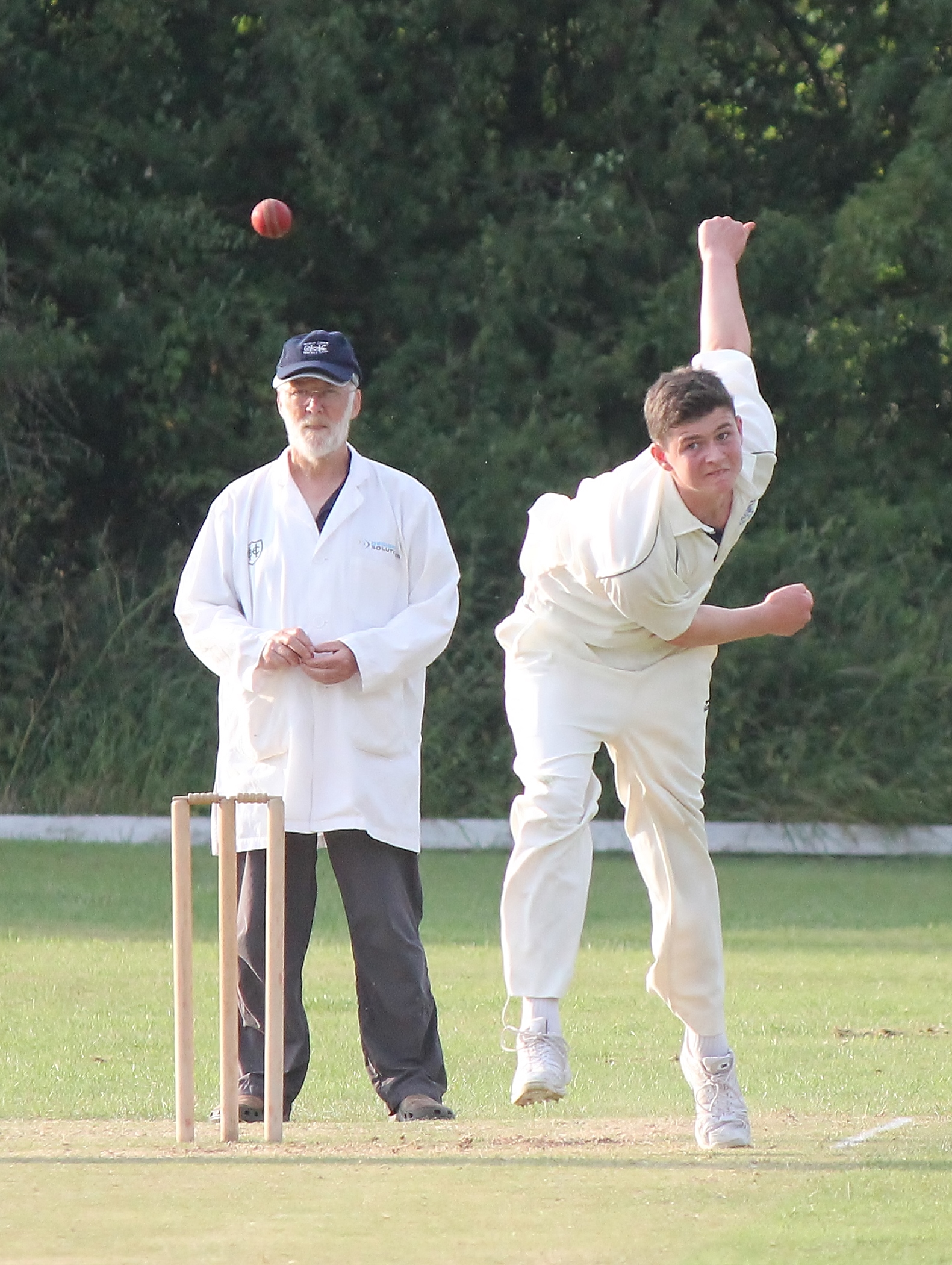